Blue Blood – The Water Within 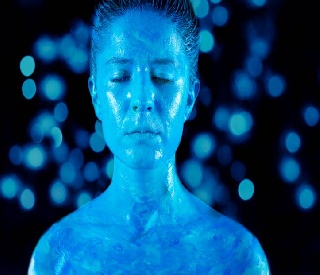 From night walks along the seafront with my grandfather, to swimming in tidal lakes and bare-back horse riding through fast flowing rivers, I have always felt exalted in ‘moving’ water. So important is it to me that wherever I have lived, a view of natural water is the real icing on the cake. But it has never been about aesthetics; as I have grown older and learnt more about our fundamental dependence on Mother Earth and the elements, I now believe it is about a fundamentally primal, emotional connection to the real lifeblood of our planet.

To any celestial eye, the most distinguishing feature to behold is created by the presence of water; it calls out loud and proud – here there is life! Water is the great carrier, from moving our produce and weather around the globe to the deep rooted part it plays in our beliefs and our emotional expression. Today our need for better water conservation is an inescapable fact which most, young and old, are aware of. But how many of us have considered the true spiritual nature of this element, which makes up such a vast proportion of all life? From religious rituals such as baptisms and ‘cleansing’ ceremonies of the modern era to the crucial part it played in our creation stories of ancient times, water is seen as both the purifier in preparation of entering another realm or wiping the slate clean and the physical link between Earth and Heaven.

In Polynesian mythology Father Sky and Mother Earth were united, inseparable in a divine embrace until the day that ‘Tane’ their great tree son grew up between them. His incredible might forced the permanent, physical separation of his parents. So now each time it rains it is said Father Sky is weeping for his wife and each time a mist appears Mother Earth is crying for her husband. Yet all the while their sorrow, expressed in this way, sustains all life, all their children, on Earth. The Hindus venerate the great goddess Durga for nine days each year at the end of which they ‘send her home’ by releasing around one hundred thousand statues into the Ganges. This great body of flowing water is charged with safely carrying Durga back to the world of the Divine.

And one of the most touching stories I have encountered tells of the once beautiful giant silver Raven risking its life for the peoples of Earth by flying into a dormant volcano to retrieve the last natural reserves of water from an embittered giant. When Raven approached the dark depths of the shaft, the giant was asleep and so he drank from the precious pool till he could barely move. Just then the giant awoke and came after Raven. Raven struggled to beat his wings and so clambered up the side of the shaft. The giant breathed out ferocious flames of fire that licked at Raven who continued to climb. Raven finally made it out, but at a great cost – he was so badly burned that he and his kin would forever be blackened. Raven delivered the water to the peoples of the world, even though they reviled his appearance, for he knew only water would save them.

Water gives us life from womb to grave. From the moment we are conceived we are immersed and sustained in the fluids of our mother – just as all life on Earth relies on water to flourish. As the blood in our bodies delivers oxygen throughout, the great water systems circulate fresh and salt water, warm and cold water and oxygen around the globe. Is it possible that as we deplete the water ‘without’ we will begin to sense this loss ‘within’? If one believes that we are part of the great evolution of life, even perhaps at the pinnacle; a physical expression of the Divine then some could argue we appear to be ‘hell bent’ on destroying all that has made us and ourselves in the process – why? Our blatant abuses of natural water will poison and then bleed our ‘Mother’ dry, leaving her desperately unable to sustain us and barren to the possibility of ever being able to do so again. Unlike the current energy crisis, where alternatives are staring us straight in the face, we will have nowhere to run to, nowhere to hide and no giant bird to come to our aid. The management of water as a physical and spiritual resource is a matter of life and death, and I ask, whilst respecting, recycling and conserving my water, that others will love themselves and the planet enough to do the same.