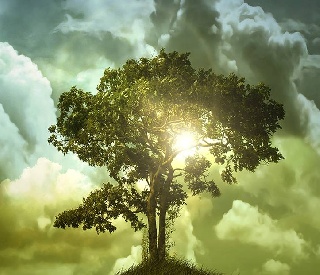 The story of ‘us’ – how we came to be and why – has as many variations as there are belief systems and personal opinions. Yet the art of storytelling; passing on such wisdoms and life lessons, is intrinsic to all the peoples of Earth. And when bound together as a collection, all the various tales of our first experiences as humans on this plant shine a beautiful light on one particular ingredient – alchemy!
Once real ‘magic’ (our instincts and intuitions), not only kept us alive but allowed us to ‘communicate’ with the natural world around us in such a way that food, shelter and medicine were available and in sufficient quantities for us to thrive. We manifested deep relationships with animals, plants, minerals and the elements based on respect and gratitude. We consciously gave thanks to the ‘essence’ of all the ingredients that gave us life. Our reward was a life that continued to become less of a struggle. This freed up time to contemplate; to start creating ideas and stories of our own to share with others in an attempt to both examine life and to keep the magic of our environment alive.

The film ‘Avatar’ employed ideas and stories told in shamanic cultures from Northern Europe to the South pacific. It may appear to be the stuff of dreams, but all of us are still capable of finding and exercising the connection with nature. Many already have such a bond with their animals. It might have looked the stuff of fantasy for one being to be ‘sensitively’ joined to another, flying through the air, but is no more far-fetched than the bond between a rider and their horse. In other films we see humans ‘morphing’ into animal form or other beings. Perhaps transformations like these were more about an expression of our ability to understand the primal urges to such an extent that we could ‘hone’ that animal or etheric quality – be it speed, strength or heightened sensory perception. Even today, under duress, people have been known to perform superhuman fetes.

We have within us the potential to ‘super’ humans, connected intrinsically to the energy that creates all matter on Earth. By returning to a place of respect and gratitude rather than dominance through separation, we can align our energy again with that of the Cosmos. We become a ‘life giving’ part of ‘Eden’ rather than the parasite. The loss of Eden – the ideal ‘home’ for all, may simply have come about when we believed ourselves to be separate from it and superior to it. Like all good stories, there is a lesson to be learned, not to punish or humiliate, but to teach and help prevent another negative outcome in the future. As with the classical story of our ‘fall’ the part to the villain; the snake, the Devil or our greed, is fulfilling a herculean task – to show us what not to do, or to pursue, in the future.

Crucial to all stories is the role of the anti-hero. Without one, no point of reference would exist. Take the story of the Morning Star and the little Blackfoot girl who fell in love with him. He was twinkling irresistibly in the heavens just before day break. She decided to forsake her world to be with him. Sounds romantic, but does not bode well for the girl who is eventually sent back to earth to eventually succumb to her unhappiness. In this story (which goes on to include the fate of their ‘star-child’ son ‘Poia’) the anti-hero could be seen as the set of rules that govern the girl on the earth and in the heavens, or Morning Star for tempting her, or even her own blind desires. But in truth the anti-hero presents opportunities for her to learn, time and time again. She does not but Poia eventually does and his journey is now a revered one.

The really amazing thing in all of this is that we exist at all. We are the stuff of fairy-tales and bedtime stories. Beings that can love and create, that can imagine and solve problems, that can find ways to thrive in all four corners of the globe and that, in time, can come to appreciate how the rest of existence supports us and helps us to transform our way of living, from what and how much we eat, to how we harness energy. All the most incredible life changing stories ever told came from us and our magical experiences, both consciously and unconsciously, in the physical world and in virtual realms. We can travel through time, explore new abilities and then manifest them for all to see or hear. We can inspire others, awaken visions in them and give hope. We must remember to look upon and digest all that is on offer to us with awe and wonder so that we can become full of wonder again.