The Alchemist (Peter Gabriel in the spotlight) 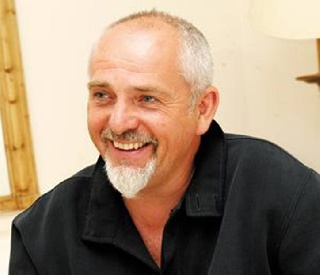 An icon of popular culture and still working at the musical frontiers, Peter Gabriel continues to have the Midas touch wherever he lays his hands. Founder of the WOMAD music festivals, enthusiastic supporter of humanitarian projects and with a growing family to bring up, he is the most earthly of men. Kate Osborne uncovers a vibrant, creative and compassionate soul.
Why is Kindred Spirit devoting a feature to a hugely successful commercial talent from the music industry, you may ask. Well, if this helps to awaken wisdom in those seeking enlightenment, so much the better. The main reason why I am delighted to include Peter Gabriel in this issue, dedicated to ‘creative’ light-workers who help to’make this place a more beautiful world in which to learn, is because he is one of a rare breed. Working tirelessly to improve the lives of others, putting his money and influence where his mouth is, Peter is the perfect example of the new energy’- the next wave of wisdom where a fusion of modern technology and ancient teachings brings those he touches just a little closer to happiness. If nothing else it is a sign of hope tha­t ‘source’ can empower all manner of men and women often going where angels themselves fear to tread.

I vividly remember the first time I heard the song ‘Sledgehammer’. I was in my mid-teens, at home in New Zealand, in my room with the radio on. I was mmediately blown away by the surge of the brass instruments and the heavy rhythmic beat of the track. I got off my beb and found myself in the middle of my room, dancing, surrounded by the glittering stars of my imagination oblivious to all other life…and then the lyrics kicked in. It was sex on the airwaves! I blushed. I smiled. I just kept on dancing and singing along as if this man was in the room seducing me. Then as soon as I could I bought the album ‘So’ and I was hooked. About the global success of the single Peter says,’Sledgehammer was obviously a big track from that record and that was in part homage to the music that I grey up with, you know. I loved soul music, blues music, and that was a chance to work with some of the brass players that have worked with Otis Reading who was my all time favourite singer. It was a fun thing to do, but again that was built around a great groove and a good feel.’

It certainly made me feel good the and still does now. But it was when I looked at the lyrics of this work and those from the later album ‘Us’ I realised this wasn’t just another pop-star looking to cahs in. He even commissioned an artist to create visual impressions of each of the tracks on the album to add another dimension to his body of work. Peter comments, ‘I had never been more sincere in my life. Whether that’s sincere enough, I don’t know. But I do know that I had taken a lot of trouble to give the listener an unadulterated glimpse of my inner life. Therapy taught me that it’s always essential to be open about one’s feelings and emotions, in order to get a grip on them. What is primarily involved is communication and relationships between human beings in all possible shades. And what is involved is how you, as an individual, are seen by other people. The idea, then, is of”us” and “them”. As soon as a group of people are designated as”them”, a remoteness, a distancing, is created right from the outset.’ Both of these bodies of work touched so much of what was bouncing around my head and heart – like love, spirituality, connecting with others and with our own higher self, dealing with aspects of shadow-self, greed, power over others, money, self-importance, vulnerability, trust and hope. As the years passed by and my own curiosity in the meaning of it all grew, so did my understanding of this man’s talents. In 1967 Peter started his musical career fronting the rock band Genesis. Already he stood out from the norm with his costumes and theatrical performances on stage bracketing him with the likes of David Bowie and Marc Bolan.

This incredible show of creative talent and self-expression was unique. Peter was never one to sit on the fence. And today he still lets his actions speak louder than his words. This is perhaps what sets him apart from most music celebs – he follows his heart and invests his time, expertise and money into projects that actually help to make a real difference to the lives of his fellow humans. But when it comes to speaking your truth, it is not always to everyone’s liking and Peter faced a religious backlash for his soundtrack to Martin Scorsese’s controversial film ‘The Last Temptation of Christ’ Peter answered his critics by saying,’I underestimated the amount of controversy… there was no doubt about the integrity of his (Scorsese’s) desire to make a religious film, and I felt that his approach was right in trying to bring alive the struggle between Christ, the Son of God, and Christ the man. The lovemaking scene that offended so many people, put in the context of a man falling in love, marrying and having a child with a woman, is not in itself controversial, although applied to Jesusit may be. But if Jesus was torn between humanity and divinity, it would have to involve that sort of temptation.To me, it was a very spiritual film.’ And he went on to win his first Grammy Award for Best New Age Performance and a Golden Globe nomination for Best Original Score – Motion Picture.

In 1999 Peter began a conversation with ‘Richard Branson and Nelson Mandela about ‘The Elders’ – a new gathering of world leaders. Peter said, ‘In traditional ocieties, the elders always had a role in onflict resolution, long-term thinking nd applying wisdom wherever it was needed. We are moving to this global viIlage and yet we don’t have our global elders. The Elders can be a group who have the trust of the world, who can speak freely, be fiercely independent, and respond fast and flexibly in conflict situations.’ In 2007 The Elders finally became a reality when, at his 89th birthday bash, Nelson Mandela announced the formation of The Elders. (To read the rest of this feature order Kindred Spirit’s issue 92)